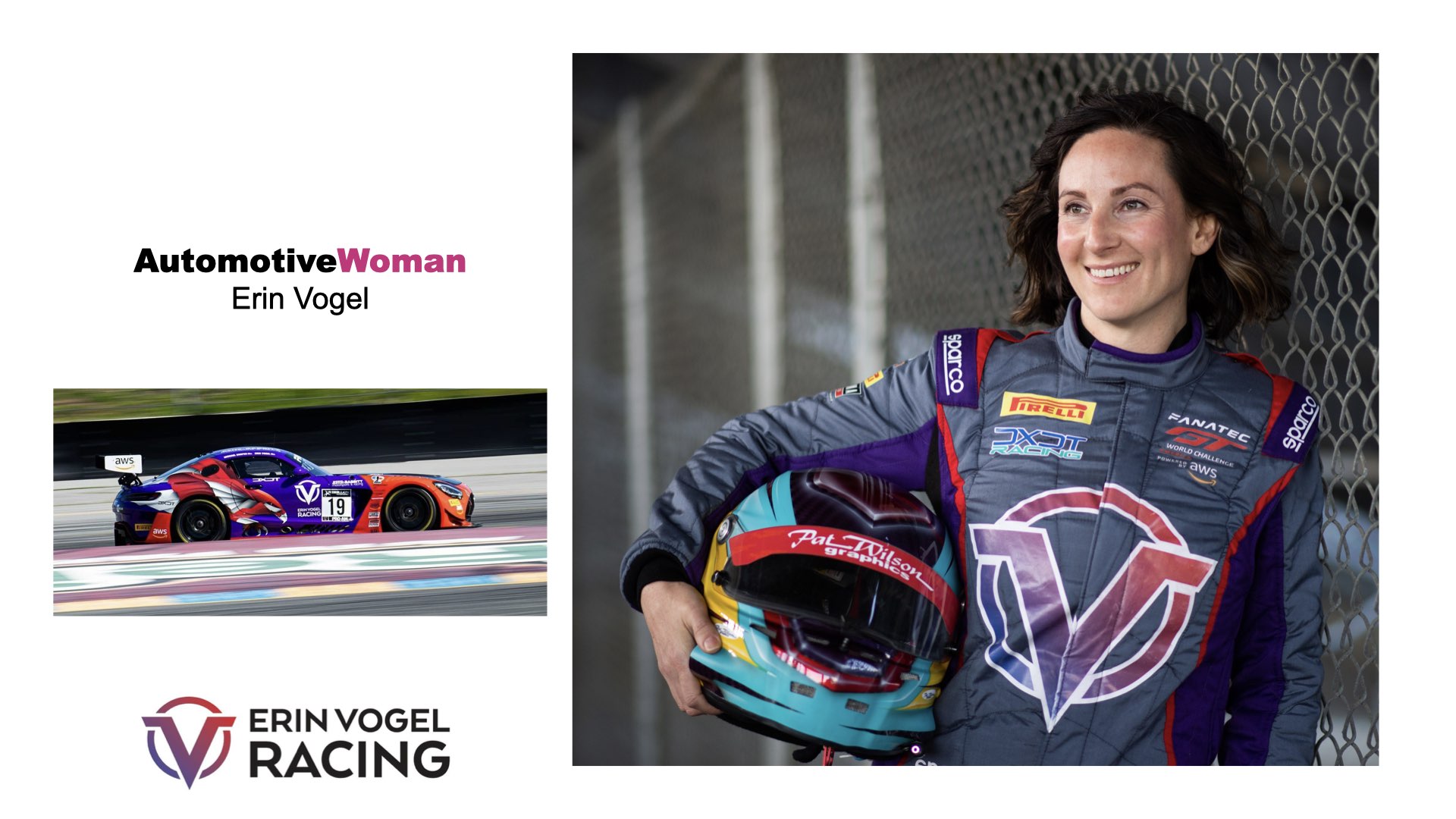 We profile women who have achieved success in automotive and motorsports with integrity, passion and sheer determination. These women define the term AutomotiveWoman.

We are automotive leaders.
We are motorsport professionals.
We are women inspiring the next generation.

Erin, alongside co-driver Michael Cooper, is pilot of the #19 DXDT Racing Mercedes AMG GT3 in the 2021 season of GT World Challenge America. She has also raced for Flying Lizard Motorsports in GT4 competition, piloting cars Audi, Porsche, and McLaren.

Describe a typical day at work.

On a race or test day, it’s up early to be at the track with plenty of time to rendezvous with the team and have a strategy meeting for what we hope to accomplish that day. Then we’ll alternate between driving and video/data review throughout the day, also checking in with the crew to stay on top of setup changes and any maintenance items that may come up so that we know what to expect next time we’re in the car. We’ll end the day with a debrief at the track, then a quick dinner and an early bedtime.

When I’m home, I get up around 5am to work out for a few hours (except on Sundays!), then I’ll go into the office for the remainder of the day. My family owns a property management business, which my brother and I now run alongside a small group of great employees.

Describe a current job-related responsibility which keeps you on your toes, daily.

I’m definitely very focused on my fitness right now. Stepping up into a faster car with higher G-loads I absolutely want to make sure I’m up to the task. GT3 has been my goal for a while now, so I’ve been working towards the fitness side of it consistently for a long time as well – but it’s something that requires constant attention.

Something that should be happening daily is that I need to put more of focus towards social media and engagement, but I have to admit that I struggle to come up with fresh content. It’s something I’m constantly trying to make little strides in, so if you stick around hopefully I’ll continue to have better and better things to share with you. 😉

As a woman, tell us the most challenging hurdle you’ve had to overcome while climbing the professional ladder?

It’s always difficult to tell which slights truly have to do with gender and which can simply be put down to personality. I would say that as a coach I’m often doubted at first and maybe have to prove my worth more than a male counterpart might – until I get in the car with them or take them for a demo lap! Occasionally I’ve struggled to be heard or taken quite as seriously as I’d like to be in the team setting, but then again perhaps I didn’t assert myself as I should have initially – though I suppose if we believe stereotypes, that’s each of us playing into our expected roles. Then I’ve also experienced the opposite to be true, where I perhaps get more attention than a male driver might or sometimes even receive more attention than I’m comfortable with (flirtation, mansplaining, etc.). But I feel that I’ve learned to manage all these challenges by keeping things professional, maintaining a steady character, speaking up when necessary but mostly listening a lot, and always being prepared as much as possible. 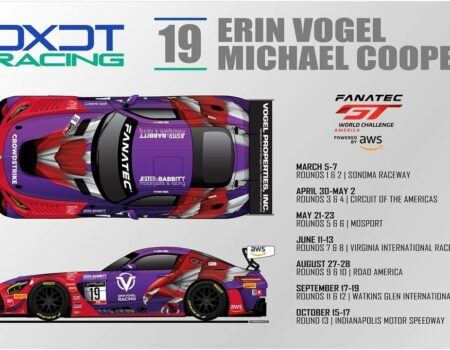 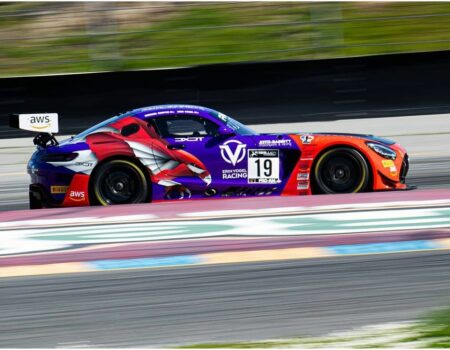 When met with discouragement, how do you stay focused and/or prevail?

The answer to that is always in the “why.” Figure out why it didn’t work out, figure out a solution, and figure out what to do to execute that solution. Ask for feedback, collect data, analyze. And then keep the focus forward.

Being assertive is considered an asset in business.  As a woman, how do you balance the need to be your own champion with the stigma associated with the term, when it’s applied to women?

Being pleasant and professional, logical rather than emotional, steady and focused, and mostly just treating others as I want to be treated goes a long way. First impressions matter a lot, and developing trust among your teammates does also. And then there are the rare times that saying your piece politely but firmly and drawing the line is necessary to get what’s needed. Don’t be afraid to rely on others as well. Find people who will always be on your side and who can advocate on your behalf when necessary. There is no shame in having partnerships among your teammates, and ultimately you will each be able to help the other out.

For someone who has never made a mistake or has never tried something new: What was your one BIG professional mistake, and what did you learn?

Letting my natural shyness come across as uncertainty. These days when I don’t have the answers I just try to be curious rather than receding inside a shell and not speaking up, not being involved, or not making a decision. It’s always ok to ask for more information – racing is ABOUT information, at its very core. If I’m asked a question to which I don’t know the answer, I simply counter with a question until I find the answer (which, because I try to be prepared, usually doesn’t take too long). I didn’t grow up in or around this sport, so there are a lot of things that I don’t inherently know. It’s probably more work in some ways coming into motorsports later in life, but there are benefits to bringing other experience to the table as well.

I’m not sure I’ve really had that big moment yet, but I’ve still had a lot of great moments. One of my best racing memories was the 2018 NASA 25 Hours of Thunderhill, where I got to work with other professional female drivers for the first time (Christina Nielsen, Aurora Straus, Ashton Harrison, and my friend Laura Ely who was pursuing racing at higher levels than I was at the time). These women who were pushing and succeeding really inspired me to take the necessary steps to get my driving to the next level, and then driving with Flying Lizard Motorsports really opened up a lot of opportunities for me as well. 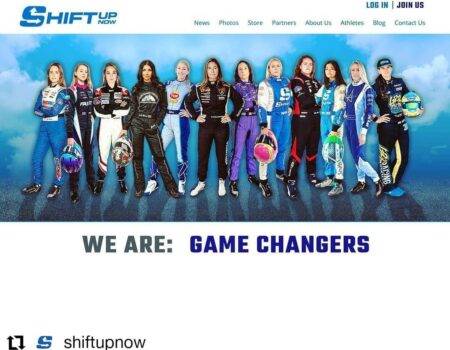 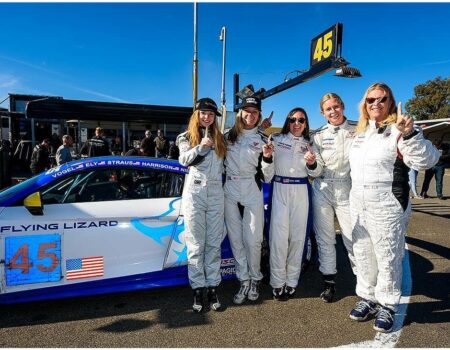 Vogel | Surround yourself with people who want the best for you, and will push you to be better!

Words of wisdom you received from a mentor that you’d like to pay forward?

Find out what the work is, then do the work.

Meaning that you need to set a goal and understand what it will take to get there, then create a plan and execute. I think it’s a lot easier to be afraid of hard work when it isn’t really quantified. When you know what you need to do and there’s a path of sorts then the hard work isn’t so intimidating or overwhelming, because you just keep putting one foot in front of the other and pretty soon that looks like progress.

If you switched career paths tomorrow, what would you do?

It would be very cool to still be involved in racing some way or another, but I also love fitness and I love helping people so I would love to find something that could merge all those things together. Or getting back into the design world. My problem isn’t figuring out what to do – it’s wanting to do everything and not having enough time! And figuring out how to monetize that…

You can be girly/womanly and still run with the boys. You can be any way you want to be, so long as you’re focused and willing to put in the effort to learn, and to always keep learning. Smile at people, treat them well, and make allies. 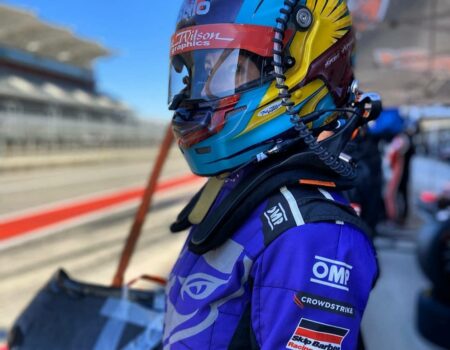 Vogel | Whether the helmet is on, or off…. 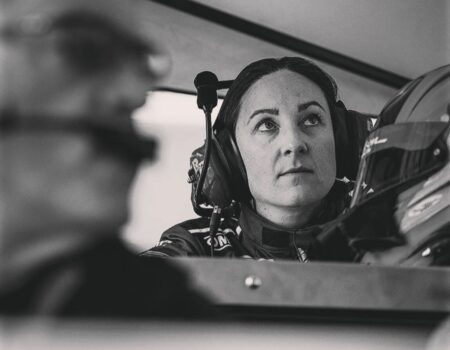 The focus and goal remains the same.

Where do you see yourself in 5 or 10 years from now?

I’d like to continue improving my craft and moving up into higher levels of sportscar racing, and maybe even racing on the global stage in the next five years or so. In 10 years…who knows? But I’d like to be doing something good with whatever influence I gain in my motorsports career.

Famous words or motto you live by:

I think it’s important to know where you’re headed, but often the path that lies behind you doesn’t necessarily look the way you imagined it would when you started out. I think this mindset helps turn hurdles into lane changes, rather than allowing them to be roadblocks – failures. It allows you to continue moving forward with alacrity and positivity, despite things not always going the way you thought they would – which will absolutely happen at times!

Fill in the blank:

I came. I saw. I focused, worked hard, and created a successful outcome.

Night owl by nature, but morning person by design. When I decided to get serious about racing, I adjusted my whole schedule so that I now go to bed early and get up early to train – this way the early call times at the track are just normal wakeups.

Favorite workout, or best way to blow off steam?

What’s on your music playlist at the moment?

Netflix & chill or a good book?

Definitely a good book, though of course some nights it’s easier to turn the brain off and just Netflix. 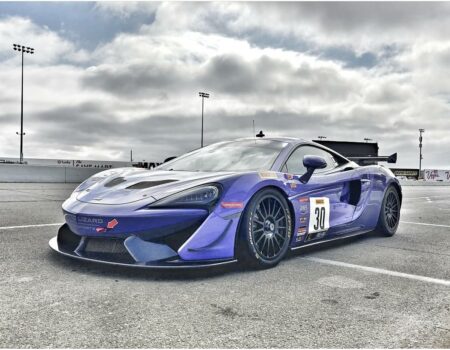 Vogel | Behind the wheel of today’s best supercars, McLaren…… 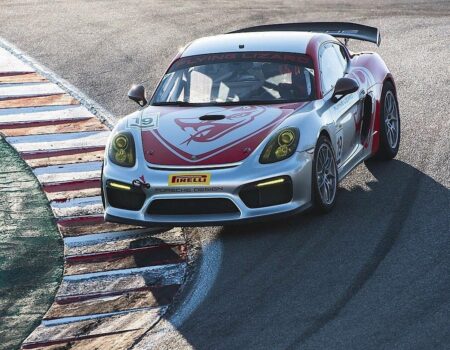 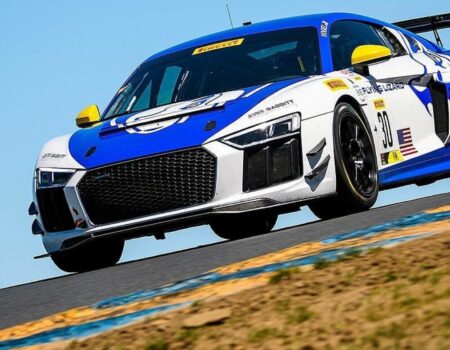 Hobbies outside of work?

Best motorsport documentary or movie of all time. Days of Thunder. Rush. Ford vs Ferrari. Other?

There are so many good films, but honestly my favorite racing story ever is Go Like Hell: Ford, Ferrari, and Their Battle for Speed and Glory at Le Mans. Read it. Ford Vs Ferrari, though excellent, pales in comparison (but for me the movie always does in comparison with the book).

I can play the flute, oboe, and a little piano – though “play” might be generous these days.

If you won the lottery, what’s the first extravagant gift you’d purchase yourself?

A villa in Italy.

I had an upset stomach on the day of a job interview, and let’s just say I didn’t make it to the bathroom quite in time. Cleaned up as best I could but had to go the interview in the same pants. Got the job! Kept a spare pair of jeans in the car for years after that. Only had to use them once when I spilled my latte all over my car and myself.

Twisted seatbelts. Not having the same amount of shampoo and conditioner.

Name someone famous who would play you in a movie:

Maggie Gyllenhaal, or either of the great Rachels – Weisz or McAdams.

If you could invite only three people to dinner, who would they be and what topic would you discuss?

Jane Austen, Sacajawea, and Lyn St. James. We would discuss being a woman in a man’s world, education, mentorship, and walking your own path.

Charities or Causes you support:

Shift Up Now, working to ensure that female athletes are funded in top seats in motorsports.

How do we connect with you online?