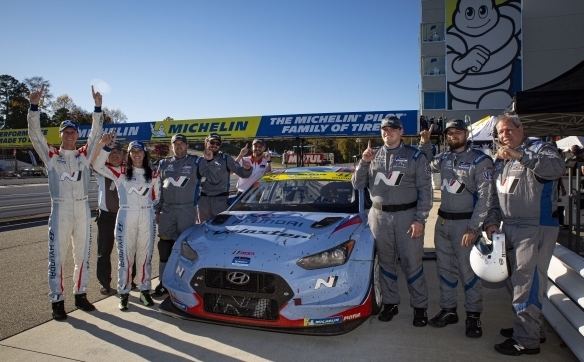 “The competition continues to rise in TCR and having our entire 2021 line-up return, while welcoming four new drivers shows we are not taking defending the championship title lightly,” said Bryan Herta, president, Bryan Herta Autosport. “Thanks to the men and women of BHA who worked hard through the holidays and a short off-season, we are ready to start 2022 stronger than ever.”

Reigning champions Taylor Hagler and Michael Lewis will return as teammates to defend their title. The pair made their debut as teammates in 2021. Their history-making season saw Hagler become the first woman ever to win the IMSA Michelin Pilot Challenge title and Lewis the first two-time TCR Champion. New for 2022, Hagler and Lewis will co-drive the #1 Hyundai Elantra N TCR.

Ryan Norman, 2020 IMPC TCR Champion, returns to BHA for his third season. Norman and his 2021 teammate, Parker Chase were the first drivers to take an Elantra N TCR to victory circle in North America. They won at Norman’s home race at the Mid-Ohio Sports Car Course. The victory was just the third race for an Elantra N TCR race car. For 2022, Norman will co-drive the #2 Elantra N TCR with AJ Muss of Rumson, N.J. Muss enters his second full season racing a Hyundai and his first in partnership with BHA. Muss represented the United States in the 2018 winter Olympics in the snowboard parallel giant slalom event and is in the qualifying process for the 2022 games.

Canada’s Mark Wilkins, the 2019 co-champion, returns for his fifth season racing a Hyundai with BHA. Wilkins and his to-be-announced teammate will co-drive the #33 Elantra N TCR. Wilkins’ run of success racing for BHA includes eight victories and one championship title.

TCR race winners Michael Johnson and Stephen Simpson return to co-drive the #54 Universal Coating Elantra N TCR. Johnson, who is paralyzed and races using hand controls, and his long-time teammate Stephen Simpson joined the Hyundai squad in 2021. They opened the 2021 season with a podium finish at Daytona. Their third-place finish was the first time Hyundai was represented on the podium at the famed Daytona International Speedway. Johnson and Simpson went on to run inside the top ten all season and collected another podium at Virginia International Raceway (VIR) before finishing sixth in the series standings.

Mason Filippi returns to the BHA squad in 2022. It will be his fourth season of IMPC racing in TCR with Hyundai. Having finished second in the championship in 2019 and 2020, Filippi will vie for the title in 2022 alongside Tyler Maxson, racing the #77 Elantra N TCR. Maxson is just 17 years old and already a two-time sports car champion. Maxson became the youngest champion ever in the SRO series when he won the TC America championship in 2019 at just 15 years old. Maxson then dominated the SRO TCR Championship as a rookie in 2020, winning 12 races in the Hyundai Veloster N TCR. Maxson competed in the IMSA Michelin Pilot Challenge full-time in 2021 and has finished on the podium three times since joining the series.

Texans Harry Gottsacker and Parker Chase will team-up to co-drive the #98 Elantra N TCR. Gottsacker and Chase, both from Bulverde, Texas, started their sports car careers as teammates in 2016. Chase finished second in the IMPC championship in 2021, earning one victory and three podium finishes racing the Elantra N TCR. Gottsacker enters his fourth season representing Hyundai with BHA. In 2021, he tied the series record for pole positions and has finished inside the top five in the championship each season since joining BHA in 2019. Gottsacker was the championship runner-up twice in 2019 and 2020.

The 2022 season kicks off with the season opening test days, the “Roar Before the Rolex 24,” at Daytona International Speedway, Jan. 21-23, 2022. Round one of the 2022 IMPC season takes place the following weekend with the BMW Endurance Challenge, a four-hour race during the Rolex 24 Hours at Daytona race weekend on Friday, Jan. 28, 2022.