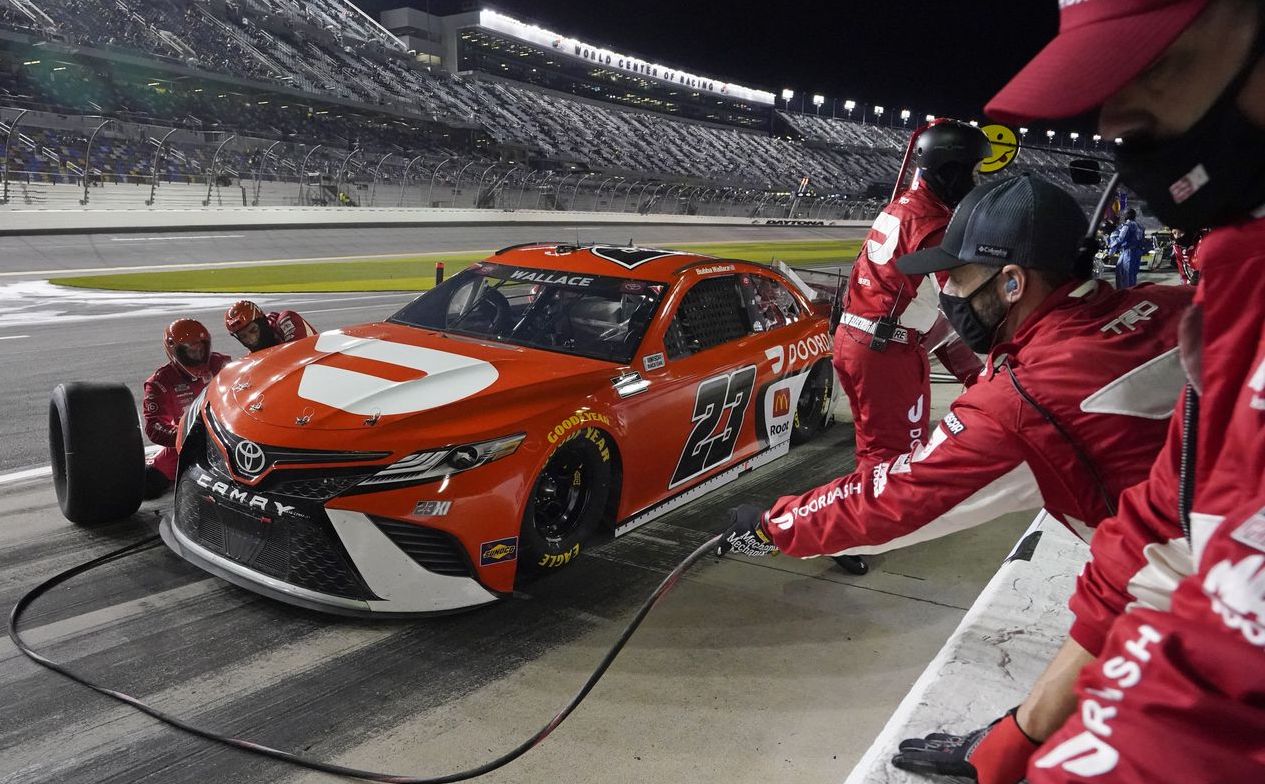 All four Joe Gibbs Racing drivers head to the Playoffs

DAYTONA BEACH, Fla. (August 28, 2021) – Bubba Wallace (third) finished in the top-five to lead Toyota in the Coke Zero Sugar 400 at Daytona International Speedway on Saturday evening. Christopher Bell, Kyle Busch, Denny Hamlin and Martin Truex Jr. will officially be a part of the 16-driver Playoff field that was set at the conclusion of this race.

Can you take us through that last lap?

“Stay in it, that’s all you can do. I needed to win. I was comfortable taking a hit if we were caught up in it. You’ve got to do what you’ve got to do and I came out third. I was happy with that, but we needed to win to get in. Up and down regular season for us. Thankful for opportunity. It’s a brand new team. Everybody is still figuring each other out. I’ve always said our superspeedway stuff is good. It’s good to give us a finish we deserved. I don’t think we were a winning car, so I can’t hang my head too much, but knowing that we needed a win and we came up just short stings a little bit. Thanks to Columbia for coming aboard our Toyota Camry this weekend. It looked awesome. It looked great. It’s the cleanest I’ve ever kept a superspeedway car, so maybe I will get to take this one home. Long night with a lot of perseverance.”

How was your race car during tonight’s race?

“I pushed whoever was in front of me to the lead every time and I couldn’t quite clear with them and then we were running third and the leaders crashed. Man, that sucks. We definitely gave ourselves a shot which was good and just got killed there at the end so there was nothing left.”

What happened during the accident?

“I’m not sure. I think the 21 (Matt DiBenedetto) and the 9 (Chase Elliott) ran each other into the fence and then they came back down the track and hit me and then somebody from the bottom came and hit me and squashed me in the middle.”

Can you describe what the racing was like tonight?

“It was kind of a mix from the old package with tandem to kind of the package we’ve had over the last two years. It was big runs, but you could stay connected. The speeds being slower you could just hammer the person in front of you really, really hard and the tires did not lose grip because you were under the tire with the speeds we were running. Very intense as far as I am concerned. Just kind of a log jam there at the end. We gave ourselves a chance. We were running third when the two leaders wrecked and got collected in it. Just some bad luck.”

How disappointing is it to not win the regular season title?

“It makes it five points harder. Realistically, it’s five points in any stage and any end of the race. We’ve got to just keep performing like we’ve doing, keep running up front and then we’ll win and keep moving on.”

What is your outlook for the Playoffs?

“Every week we give ourselves a chance so I’m excited for the Playoffs to start especially these first rounds of tracks. We definitely want to just keep getting some momentum, keep performing well and things will fall our way.”

Can you explain what happened in the accident you were involved in?

“Just got a run up the middle coming in through (turns) one and two. I got to the 18 (Kyle Busch) and was pushing him and it all checked up. Just an accordion. I got hit and spun. One of those superspeedway deals. You’re trying to push the guy in front of me and when they check up you’ve got to slow down a little bit and sometimes you get hit. In that case, I got squeezed out of the middle and was sandwiched. It’s Daytona. We had a great Bass Pro Camry. It was good. We got shuffled a bunch of times, but we kept getting back to the front so I was happy and we were in good shape until the pit strategy kind of went south on us and we lost track position. The wreck was just an accordion deal and I got the bad end of it.”

How is your confidence as we approach the first round of the Playoffs?

“It’s pretty high. We just need to get away from all of this bad luck we’ve been having. I feel like every week we’ve been getting run into and crashed and our car was tore up. We’ve had to battle back from a lot, but the guys on the Bass Pro Shops Toyota tonight did a great job. The car was really fast, just wrong place at the wrong time. Feeling good about the Playoffs. A lot of good tracks coming up and back to some normal tracks where we can race hard. Darlington was an awesome race for us this year so I look forward to kicking it off there and see what we can do.”

“You could tell that everyone was feeling out the new package early on in the race. It was pretty stable. I didn’t really have any balance complaints all race long. Our Rheem Camry was plenty capable of racing for the lead and unfortunately we got caught up.”

What happened to take you out of the race?

“Just a bunch of blocking going on and guys got crossed up. I don’t know if anybody even touched me. I just lost it. It’s a disappointing effort on my part I guess. I got a little help there from the 47 (Ricky Stenhouse Jr.). I thought I had it straight and then I didn’t. And I don’t know who came out of nowhere but they T-boned me so that was fun. Just frustrating to come to these places and always wonder if you’re going to walk out of here. Thanks to Interstate Batteries, Toyota, M&M’s. We’ll see what we can do next week.”

How was your race?

“We had a pretty decent race going and it was kind of shaping up at the end. I think we proved what we had there that last stint going into that last pit stop running in the top five with the other Toyotas. That was really the first time all day that I got the car in the outside lane and it ran really well up there. I was really proud of that and really proud of the race that we ran. It’s Daytona and it’s really hard to miss these wrecks. You can always do something different. I’ll certainly replay that one in my mind many times, but it’s over now.”

Toyota (NYSE:TM) has been a part of the cultural fabric in the U.S. and North America for more than 60 years, and is committed to advancing sustainable, next-generation mobility through our Toyota and Lexus brands. During that time, Toyota has created a tremendous value chain as our teams have contributed to world-class design, engineering, and assembly of more than 38 million cars and trucks in North America, where we have 14 manufacturing plants, 15 including our joint venture in Alabama (10 in the U.S.), and directly employ more than 47,000 people (over 36,000 in the U.S.). Our 1,800 North American dealerships (nearly 1,500 in the U.S.) sold 2.8 million cars and trucks (2.4 million in the U.S.) in 2018.

Through the Start Your Impossible campaign, Toyota highlights the way it partners with community, civic, academic and governmental organizations to address our society’s most pressing mobility challenges. We believe that when people are free to move, anything is possible. For more information about Toyota, visit ToyotaNewsroom.com