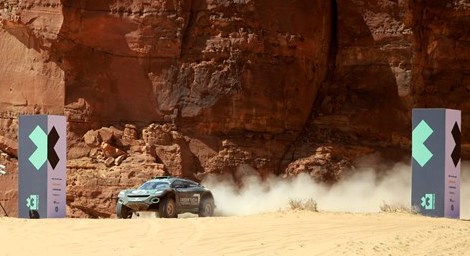 24 May 2021, London: The stage is almost set for the second stop on Extreme E’s calendar– the Ocean X Prix – which takes place this weekend (29-30 May) in Lac Rose, Dakar on the West African Senegalese coast.

Rosberg X Racing (RXR) took victory in the inaugural X Prix last month in the Saudi Arabian deserts, but with the top three teams within seven points of each other, the Ocean X Prix promises to provide thrilling racing action in a region brimming with motorsport heritage.

Alejandro Agag, Founder and CEO or Extreme E said: “I am delighted to be back in Dakar, a place with a vast motorsport heritage, and I can’t wait to see our world-class line-up of drivers compete on this latest course we have devised. The Desert X Prix delivered some truly thrilling racing with a stunning backdrop and I’m sure Senegal will provide the same.  “But in Lac Rose we find an area suffering at the hands of the climate crisis, which is the true reason we are here. It doesn’t take long upon arrival to see one of the biggest issues, plastic pollution, which is affecting the local community and its marine life. Through our Legacy Programmes, we are supporting the local community to make change, and I can’t wait to see it for myself and help where I can.”

Nico Rosberg, RXR Founder said: “The team did an incredible job in Saudi Arabia to get the win and we’re very proud to be the first X Prix winners in Extreme E history, but we know we need to stay focused if we are to remain at the front. The series is already so competitive, but this team loves a challenge, and we can’t wait to go racing again in Senegal.”

Off-road racing returns to its roots

Situated 37km from the capital, Dakar, the shores of Lac Rose hosted the finish of the world’s most famous cross-country rally – the Paris-Dakar – on numerous occasions between 1979 and 2007, and will play host to the Extreme E Ocean X Prix this weekend.  Out on the course, drivers will once again face a mostly sandy terrain, though a very different challenge and location to the deserts of Saudi Arabia. Here the race will take to the existing tracks surrounding the lake, named after, and renowned for its striking pink colour, caused by algae that thrives within its highly-saline waters. The full course will be revealed in the coming days.  Once again, nine teams and 18 drivers will compete, but in a slight change to the Saudi Arabia race format, the Final will be a four-car battle, with two teams from each of the two Semi-Finals progressing to the concluding race of the weekend.

Like the Desert X Prix, Qualifying consists of two rounds of time trials. The team starting order is decided by a draw for Qualifying 1 and Qualifying 2. All races feature two laps with the incorporated driver ‘Switch’ feature.

Teams can also benefit from a HyperDrive boost available to each driver on each lap of the race. Activated when the driver presses a button on the steering wheel, they will enjoy an extra push of continuous power for a few seconds.

New for the Ocean X Prix is the ‘Super Sector’ – a part of the course where the fastest driver in that section over the weekend will earn five points for their team. This ensures that whatever position the teams find themselves in there is always an incentive to push to the limit as points are up for grabs.

The world-class team and driver line-up below, will all be behind the wheel of the ODYSSEY 21 – a 550 bhp all-electric SUV charged using zero-emission hydrogen fuel cell technology.

For each race, teams can select which driver goes first, and decisions are kept secret until the last minute.

The GridPlay vote will open at 0900 GMT on Wednesday 26 May and close 30 minutes into Semi-Final 2 on Sunday 30 May giving fans the chance to vote for their favourite team and influence the starting line-up for the Final.

Teams that don’t make the Final can gift votes to their preferred competitors, and in Saudi Arabia this meant Andretti United were able to select its starting spot in the closing race, so every vote really does count.

The championship’s lead commentators Jennie Gow and Andrew Coley will be talking through all the action remotely via a London studio and will be joined by special guest drivers and analysts from the star-studded Extreme E paddock. Layla-Anne Lee will continue to be the voice of the paddock getting behind the scenes interviews and first reactions from the drivers.

The world’s oceans are in crisis. Half of coral reefs and a third of mangroves and seagrasses have already been lost, leaving coastal communities vulnerable to erosion, storm damage and food shortages. Crucial fish stocks are on the point of collapse, threatening not only food security for the human population that depends on them but the entire food chain. Plastics, oil spills and agrochemicals are destroying ocean environments and contaminating food chains. Climate change is causing the heating of our oceans, making them more acidic and bleaching coral reefs, melting the ice at the poles and endangering the life which they support.

Above all, global warming causes oceans to heat up, and in turn expand, which puts some islands and coastlines at risk of disappearing altogether. Sea level has been rising by around 30 millimetres every 10 years.

Lac Rose itself is a vibrant pink due to the Dunaliella Salina bacteria, which is attracted by the lake’s salt content. The bacteria produce a red pigment in order to absorb the sunlight, thus giving the lake its unique colour. However, the water levels have fallen dramatically in the last forty years due to over-exploitation of salt mining and water pumping.

In addition, plastic pollution is another major issue affecting Senegal, with the mountain of single-use plastic washing up on the shores growing day-by-day and threatening marine species and human health. An estimated 32 per cent of all plastic packaging used globally does not get recycled or disposed of properly and a staggering 80 per cent of plastic found in the ocean comes from this unmanaged waste on land. If left unchecked, four billion tonnes of plastic pollution will enter our land and oceans by 2050 under a business-as-usual scenario.

Up and coming conservationist Sheena Talma will join the series in Senegal to host talks on these issues and support the Legacy Programmes.

As with each of its locations Extreme E is launching Legacy Programmes to support the fight against the climate crisis and the local communities suffering due to the many issues it brings.

In Senegal, Extreme E is supporting two projects. For the first, the championship has teamed up with local NGO, Oceanium, which Extreme E identified in partnership with to.org, to plant one million mangrove trees in Senegal across 60 hectares with the aim of reforesting mangroves, providing education to local populations and improving social cohesion.

For the second, the series is supporting the EcoZone Project, a living lab that addresses the Lac Rose community’s primary needs while preserving the environment through experiential learning, regenerative agriculture and a circular economy. As part of this, the EcoBrique Challenge was launched which tasked the community to create bricks for construction from plastic waste.

Extreme E will visit these projects in the lead up to the Ocean X Prix continuing to support the important work carried out by the local community.

When and Where to Watch

The Finals will be shown in more than 180 countries by 75 broadcasters including Fox Sports in the USA, ITV, Sky Sports, BBC and BT Sport in the UK,  Teledeporte in Spain, Proseiben MAXX in Germany, Mediaset in Italy as well as Eurosport across most European Markets and SuperSport in Africa.

A full list of broadcasters outlining what will be aired and when it’s available can be found here.

Extreme E has joined forces with Count Us In to launch the Extreme E Count Us In Challenge – which uses the power of sport, and the excitement of motor racing, to inspire fans to take practical steps to reduce their carbon footprint and, in doing so, urge governments, cities and businesses to accelerate progress on climate action.

Steps range in impact from pledging to walk and cycle more, eating more plant-based food, to Extreme E’s ultimate goal of switching to an electric vehicle. One of those steps is use less plastic, which would have a huge impact in Senegal as the country fights plastic pollution and the issues that it brings.

All steps taken will be added up and the winning team will claim the overall Extreme E Sustainability Award at the end of the Season.