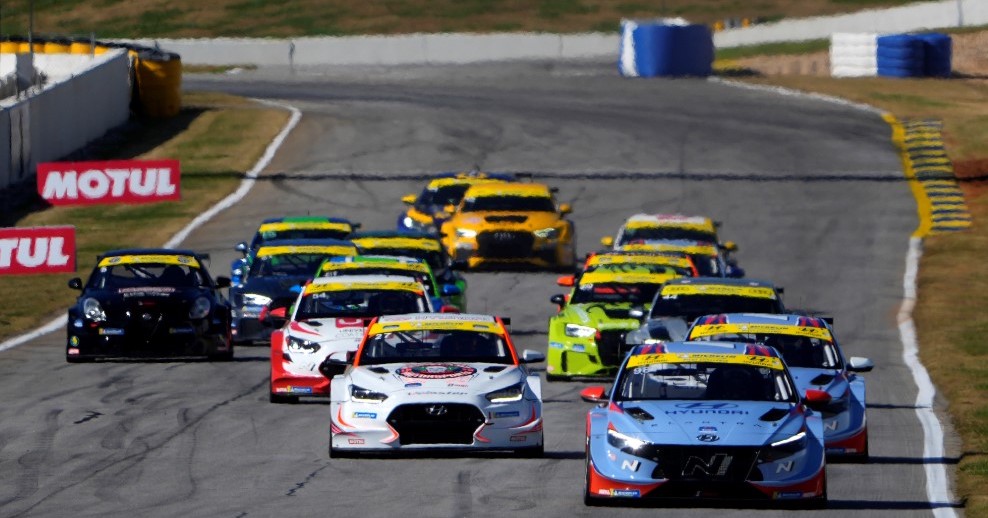 Braselton, Ga., Nov. 15, 2021 – The Bryan Herta Autosport pairing of Taylor Hagler and Michael Lewis clinched the TCR class drivers’ title in the IMSA Michelin Pilot Challenge by finishing fifth at the series finale at Road Atlanta. The result also allowed them to secure the teams’ championship, while Hyundai was confirmed as manufacturers’ champions for the second consecutive year.

The championship win is a second at the wheel of a Hyundai for Lewis – who also won the drivers’ crown in 2019 – but a first for Hagler in her first season as part of the Hyundai Motor America-supported team. The title also makes her the first female IMSA Michelin Pilot Challenge champion and the first female Touring Car Racing (TCR) champion in North America.

Hagler’s and Lewis’ run to the championship was earmarked by incredible consistency. Across the 10-event season they scored only one win, courtesy of a late pass for the lead at Lime Rock Park but amassed a total of six podiums – by far the highest tally in the class. They only finished outside of the top five once in the campaign. Their performance across the year put them in a comfortable position entering the two-hour finale. The pair only had to start the race to be guaranteed enough points to end the season in celebration.

Hagler and Lewis also gave BHA the teams’ title for a third consecutive season. The manufacturers’ crown was decided in the final corners of the final race of the season. Hyundai entered the weekend with a slender lead over their closest rivals but points for third – provided by Hyundai Motorsport Customer Racing Junior Drivers Tyler Gonzalez and Tyler Maxson in their Copeland Motorsports Veloster N TCR – allowed them to increase their advantage in the final standings.

In the car’s debut season, BHA’s pair of Elantra N TCR cars were similarly crucial to securing the sweep of the titles. The Elantra N TCR crews won a race apiece. Parker Chase and Ryan Norman scored the model’s first win in IMSA competition at Mid-Ohio – the same track where the Veloster N TCR had its own maiden victory in 2019 – before Mark Wilkins and Harry Gottsacker led a 1-2-3 for the team at Hyundai USA’s home race at Laguna Seca, Calif.

Between them the two Elantra N TCR scored six podiums and accounted for four pole positions – the most of any model on the grid. The pace of the new-for-2021 package was on full show in qualifying for the finale where the two cars locked out the front row before leading the early part of the race. Chase would be the best placed of the Elantra N TCR drivers in the championship – taking second place. That finish was equaled by his #98 team, with the #33 of Wilkins and Gottsacker ending the year fourth in the teams’ points.

The season brought the largest number of Hyundai customers onto the track so far in IMSA competition. Away from the trio of BHA entries, four other teams fielded Veloster N TCR cars during the season. Running a car adapted with hand controls, Michael Johnson and Stephen Simpson started their first season with the Hyundai on a high point. On a circuit where straight-line speed is vital, they became the first Hyundai crew ever to stand on the podium at the famous Daytona International Speedway after finishing third in the series’ showpiece season opener. Sharing a Veloster N TCR entered under the name of Johnson’s eponymous team, they would revisit the podium later in the season at Virginia International Raceway. They finished sixth in the championship.

“Winning any title in the IMSA Michelin Pilot Challenge is a huge achievement because the series is so competitive,” said Andrew Johns, Hyundai Motorsport customer racing manager. “Now that Hyundai Motorsport customers – led by Bryan Herta Autosport – have won all three TCR class championships for the second consecutive year, it shows the great performance of the cars, but also the strength of the team and the importance of the support from Hyundai Motor America. The high level of the entries on the grid – as well as the nature of the series’ two- and four-hour races – makes the consistency of Hagler and Lewis on their way to the drivers’ titles even more impressive. The results from all our customers have been strong all season – including for the two Elantra N TCR crews, who put in a number of excellent results in qualifying and in the races to show the superb potential of our newest TCR car in some of the toughest conditions.”

Hyundai Motor America focuses on ‘Progress for Humanity’ and smart mobility solutions. Hyundai offers U.S. consumers a technology-rich lineup of cars, SUVs and electrified vehicles. Our 820 dealers sold more than 620,000 vehicles in the U.S. in 2020, and nearly half were built at Hyundai Motor Manufacturing Alabama. For more information, visit www.HyundaiNews.com.