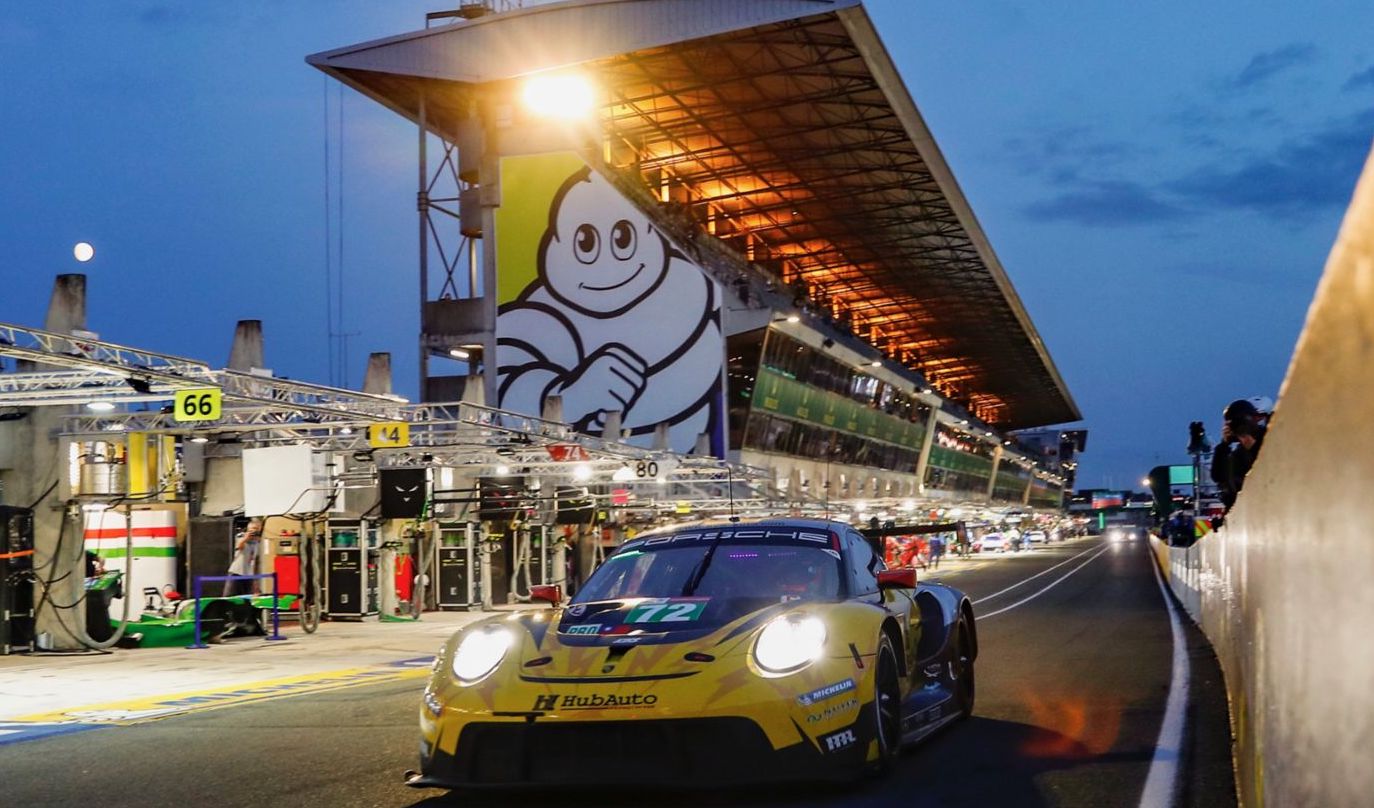 Porsche customer teams have scored the perfect result in the Hyperpole of the 24 Hours of Le Mans: Dries Vanthoor turned a sensational lap in 3:46.882 minutes on Thursday evening and planted his Porsche 911 RSR fielded by HubAuto Racing on pole position in the hotly contested GTE-Pro class.

The Belgian, who is the brother of the Porsche works driver Laurens Vanthoor, came out on top against strong opposition from all works teams in the cut-throat hunt for top times. In the GTE-Am category, 911 racing cars will take up the race on Saturday at 16:00 from the first three grid spots. At the wheel of Dempsey-Proton Racing’s No. 88 entry, Porsche Young Professional Julian Andlauer from France was more than half a second faster than Benjamin Barker in the identical car of GR Racing and Matteo Cairoli in Project 1’s No. 56 vehicle.

The Hyperpole is the final qualifying session to secure the best grid positions for the 89th edition of the Le Mans 24-hour race. The six fastest cars from the previous day’s qualifying were eligible to compete in both classes. In favourable weather conditions with cool temperatures at sunset, the two factory-run Porsche 911 RSR racers went out on to the 13.626-kilometre racetrack as soon as the session began. With a 23-strong field from four classes, they had to get the cleanest possible lap with little traffic. Hence, the start of the final qualifying session turned hectic. All drivers immediately went in pursuit of the top time – with the associated high risk.

Under these circumstances, Kévin Estre experienced bad luck in the No. 92 car of the Porsche works team. The Frenchman went all-out on his first flying lap but had to radio the pits at about the seven-kilometre mark: “I’ve had a crash. I’m ok but I can’t continue. I’m so sorry!” Estre had lost control of the ca. 515 PS 911 at the entrance to the famous Indianapolis turn and hit the barriers with the rear of his car. The damage to the vehicle prevented him from continuing. The Hyperpole session was stopped for around ten minutes due to the accident.

When the session restarted, Gianmaria Bruni planted the No. 91 sister car on P5. The Italian struggled with persistent understeer and was unable to tap the full potential of his 911 RSR. Meanwhile, Dries Vanthoor turned heads at the wheel of HubAuto Racing’s customer car: at his first Le Mans drive in a Weissach racing car, the Belgian set the fastest lap time in the GTE-Pro class in 3:46.882 minutes. The rivals from Ferrari and Corvette had no answer to Vanthoor’s time. “Pole position for HubAuto Racing in the GTE-Pro, and a grid lockout with Dempsey-Proton, GR Racing and Project 1 occupying the first three spots in the GTE-Am category – what a fantastic result for our customer teams,” said a delighted Pascal Zurlinden, Director Factory Motorsport. “We’re not satisfied with positions five and six for our works cars. Still, we’ll pull out all stops in the race. All in all, the results show very clearly that Porsche Motorsport’s customer squads always receive top-quality material which enables them to drive at the highest level!”

“The result of this qualifying feels like a double-edged sword for us. Congratulations to HubAuto Racing. They clinched pole position in the GTE-Pro class at their very first outing with the 911 RSR. And the car is new for Dries Vanthoor. A mega success,” adds Alexander Stehlig, Head of Operations FIA WEC. “For us as the works team, the qualifying didn’t go as well. Kévin made a mistake during his first hot lap. He slid into the barriers and unfortunately had to abandon the session. Gianmaria Bruni’s car didn’t achieve what we’d hoped for either with fifth place. We now have some work ahead of us and we’ll do our homework so that we can perform better on Saturday.”

For the strong Porsche customer teams in the GTE-Am class, everything ran like clockwork. Porsche Young Professional Julien Andlauer, who had already left a lasting impression in the qualifying and free practice sessions, gave his rivals no chance. With a lap time of 3:47.987 minutes, the Frenchman was in a league of his own in front of home crowds. Britain’s Benjamin Barker ranked second in GR Racing’s 911 RSR just 0.573 seconds behind, with Matteo Cairoli in third, 0.889 seconds off class pole in the Project 1 car.