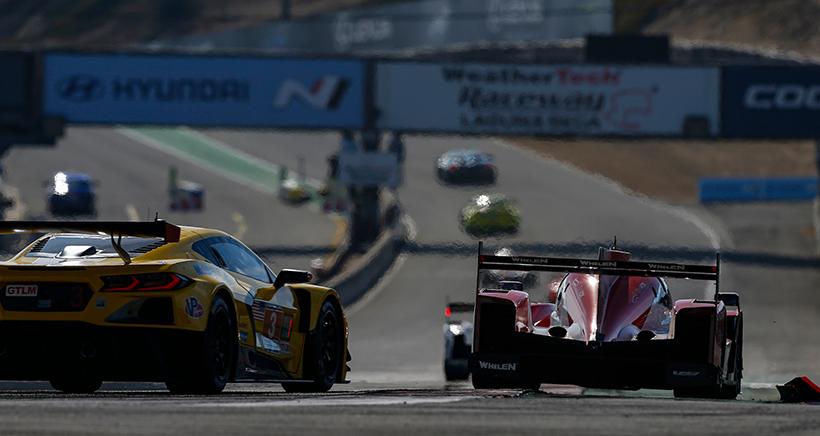 Action Will Be Nonstop at WeatherTech Raceway Laguna Seca

A favorite of fans and competitors alike, with 11 turns packed into its 2.238-mile rollercoaster, WeatherTech Raceway is a bullring of a road course; a West Coast answer to Lime Rock, if you will. That means quick, busy laps throughout the weekend particularly in the multi-class WeatherTech Championship where the fastest cars are constantly lapping traffic, and the “traffic” must be on the lookout for the faster cars while going head-to-head with other competitors in their class.

It’s a recipe for nonstop action, up to and including plenty of contact between cars – incidental and otherwise – as drivers try overtaking competitors in evenly matched cars. Teams often resort to “alternate” fuel and tire strategies to gain positions rather than risk the damage that can result from low-percentage overtaking maneuvers. It also places a premium on qualifying, for the easiest way to finish ahead of a competitor is to start ahead of that competitor.

Small wonder then that the Daytona Prototype international (DPi) Acura ARX-05s have qualified and finished 1-2 in the past two visits to the Monterey Peninsula. Or that another Acura, namely an NSX GT3, won the GT Daytona (GTD) class from the pole position in 2020.

But that was then, when Penske Racing and Meyer Shank Racing with Curb-Agajanian were leading the charge for Acura in DPi and GTD, respectively. Now, Meyer Shank has joined Wayne Taylor Racing in spearheading Acura’s DPi program, with the GTD effort split between Compass Racing, Gradient Racing and Magnus with Archangel. And that’s just the tip of the proverbial iceberg, what with a bevy of lineup changes throughout the DPi, GTD and GT Le Mans (GTLM) classes in the past 11 months, not to mention a deeper, more competitive Le Mans Prototype (LMP2) class.

Given the run of success at WeatherTech Raceway, Acura must start as favorites in DPi. If recent form is any indication, however, they will have their hands full keeping the No. 31 Whelen Engineering Racing Cadillac DPi-V.R at bay, given that Felipe Nasr and Pipo Derani are on a two-race win streak.

Speaking of having their work cut out, Acura comes to Monterey seeking its first GTD win of a season that has seen Aston Martin, BMW, Lexus and Porsche swap wins. And don’t count out the No. 1 Paul Miller Racing Lamborghini Huracán GT3. Bryan Sellers and Madison Snow, with five podium finishes, have been in the hunt most races this season and Sellers (with co-driver Corey Lewis) bested the GTD field at WeatherTech Raceway in 2019.

As usual Corvette Racing must be considered the GTLM favorite. The brace of ‘Vettes have the numbers and the full weight of the factory behind them; they’re coming off a superb showing at Le Mans and, with nearly two seasons of development behind the C8.R, they’ve honed their setups to the nth degree.

And yet, thanks to the sterling efforts of the WeatherTech Racing Porsche team, Corvette Racing has not had things all its own way in 2021. Most recently, Matt Campbell and Cooper MacNeil steered the No. 79 Porsche 911 RSR-19 into victory lane at Road America, their second win of the season. Do the giant killers have a third win up their sleeve this weekend on what amounts to another “home track?”

And for something completely different, go figure the LMP2 odds. There’s not much historical precedent to bank on, given that only one LMP2 was present last year at WeatherTech Raceway and two teams contested the 2019 race. That said, the one thing that 2019, 2020 and 2021 have in common, LMP2-wise, is PR1 Mathiasen Motorsports. Given the familiarity with WeatherTech Raceway and the fact that the No. 52 ORECA LMP2 07 brings a couple victories and the championship lead to the weekend, drivers Ben Keating and Mikkel Jensen have to be considered the favorites.

Then again, Era Motorsport and Tower Motorsport finished 1-2 at Road America, so a third win for PR1 Mathiasen Motorsports this weekend is far from automatic.

But, as the saying goes, that’s why they run the races. And any red-blooded sports car racing fan will have plenty of racing to watch in person, on television or streaming from WeatherTech Raceway this weekend.