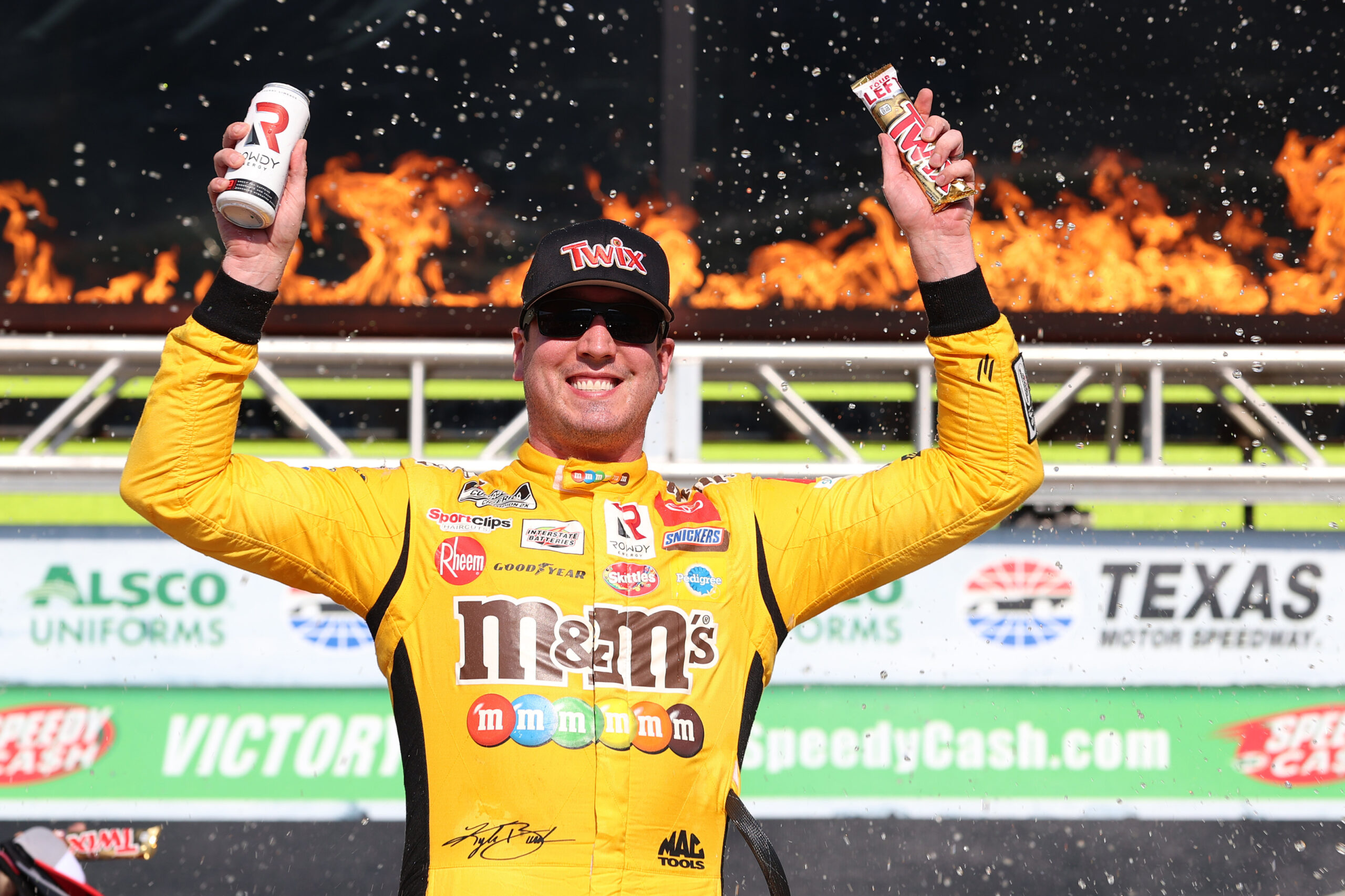 Busch drives to the victory in NASCAR’s return to Nashville

NASHVILLE (June 19, 2021) – Kyle Busch scored his 100th NASCAR Xfinity Series win at Nashville Superspeedway on Saturday afternoon. Busch has won all three of his Xfinity Series starts this season and the No. 54 has scored five victories this season with Busch earning three and rookie Ty Gibbs scoring two wins.

You are back in victory lane in Nashville. Congratulations on the milestone.

“Thank you very much. Awesome day. Thanks to JGR (Joe Gibbs Racing), Toyota, M&M’s. Obviously, being a part of M&M’s all these years – M&M’s stayed with me and for them to be here with me for the 100th Xfinity win is awesome. I can’t say enough about Interstate Batteries, Rowdy Energy, Cessna, Xfinity, and the fans, Stanley, Rheem, everybody. Interstate Batteries again, Norm (Miller), he’s my boy. It’s so cool to get 100 here, and get done what we needed too. I didn’t want this to go on much longer. It’s all good. It’s been a true testament to all of the people I’ve worked with. This group here is really, really special and doing great things and I’m just glad to be a part of it.’

Did you ever think you would get to 100 Xfinity wins when you started?

“I don’t think you ever think of those things. I think one day you just hope that you can make it, and then when you make it, you are like okay, let’s go win some more races, and lets go win a championship. Being around for as long as I’ve been around, it’s a great opportunity in this position and to get this many wins is really, really cool. There’s a lot of great people over the years that have gotten me to this point, whether it be Hendrick Motorsports or Joe Gibbs Racing, most of it has obviously come with JGR for as long as I’ve been there. That just makes it all worth while and I wouldn’t say it has all came full circle. It would be nice to keep going, but everybody’s tired of me being here, so we hit the century mark and we will see if we can get 102. I don’t know what the plan is for next year yet.”

How was the restarts down the stretch?

“I don’t know. I knew if we could get out front and go that our car was faster and we could get away. It was just a matter of beating (Justin) Allgaier. Allgaier was really good and doing a great job on those restarts down low and getting his car to carve the corner and accelerate and getting alongside of me and then using the side draft to his advantage to get by. I slipped off the bottom one time and he got by. Definitely made me work for it. He is in the Final Four each year, so one of the best guys out here to be battling with. To have our other three JGR (Joe Gibbs Racing) teammates up there most of the day. Bummer that the 18 (Daniel Hemric) got caught up in that wreck. The 20 (Harrison Burton) and 19 (Brandon Jones) did good there in the end. I’m looking forward to seeing those guys bring home some wins.”

Got a special place for this trophy?

“I’ve got the rest of the guitar trophies that I’ve earned over my career hanging over my office. This one will go right with it. It will look good.”

What a battle it was at the end of the race?

“Yeah, it was. A little bit too much, I guess. Overall, I knew that our car was really good and really fast. If we could just get clear of those guys, I could run my own line and hit my own marks, I would have the opportunity to drive away. My car was a little bit better on the longer runs. We would fire off fine, but after we got about 10 laps in, it would really just keep going, much faster than the rest of the guys. Great car. Everybody at Joe Gibbs Racing, thank you. Toyota, Mark Cronquist, everyone at the engine shop, I haven’t mentioned his name in an awful long time. He deserves it, and M&M’s of course for their participation and sponsoring us my last couple years in Xfinity racing and being able to get this 100 mark. It’s really, really special. It’s a great day for all of the teams I’ve worked for over the times. One of the crew chiefs that I had in my ’05 season and ’06 season from Hendrick Motorsports, came over and said hello. It’s really nice to have worked with all of those guys and have got to where I’m at today.”

What did you see with tire wear?

“I don’t think we had much tire wear this time around. The resin or whatever they did to the race track to get the tire to adhere and put rubber down was very helpful, very useful. It definitely did exactly what they were looking for and was able to persevere tire life. We weren’t really wearing tires out that I have seen. I think there was a guy that had a flat due to excessive brake heat with how heavy you are on the brakes here and how fast you can go down the straightaways and how tight these corners are and how much you slide through the corners. Overall, I feel like the tire was probably in my opinion a little bit on the conservative side. That’s kind of the way it always tends to be. Better to be that way than one of the uglier races we’ve had, years, years ago, blowing tires out.”

What allowed the leader to pull away from the field?

“Clean air. Dover is the same way. You look at these concrete racetracks and in my opinion the tire level to the grip level is very, very peaky, so as you are running up the grip level and the peak, it just falls down on the backside. So, when you are catching somebody, if the guy is right on that peak, there’s nothing else for you to get to be able to run faster than that guy. Dirty air plays a role. I felt like I should have been able to run Austin (Cindric) down. I was a tenth or half-a-tenth faster than him for a couple of laps and then he would get a couple of tenths faster than me and I would run him back down. It was kind of an accordion effect there of not being able to close the gap. Good cars, when they get out front, are just going to be hard to catch.”

“It really was. It was actually really racey, way racier than I remember Nashville being in the past. We used to come here, and it would always be bottom lane and if you ever got off of the bottom you were pretty much getting passed. That’s what it kind of looked like in the end, but in the beginning and the middle part of the race, you could move around and enter way high and come down to the middle or you could stay high, be wherever you want to be. Way wider than I remember it being.”

Tough Cup practice for the Toyotas. Can you get better for tomorrow and can today help tomorrow?

“I don’t know. I thought about the same thing myself. How can we correlate what we are doing on the Xfinity side and being so good and being so fast in Xfinity to being able to put that stuff in the Cup car, but it just doesn’t connect like that. It’s not that simple. Flat out, we suck. Tomorrow’s going to be a rough day.”

Do you just reflect what you have been able to accomplish in such a short time?
“Not really. It’s going to be negative of course, but if you look back on the last 10 years with all of the rule changes, hell, I thought we could make that number 150 by now, or 160, 170, whatever, but with everything that kind of went down and it’s 100 now. Technically, they probably kept me here a while longer. I would have been done a long time ago. Reflecting it, looking back on it, it’s cool absolutely. I remember the 60 car of Mark Martin would just dominate every weekend. I would wonder to myself, could anyone run with this guy? And that was 49 wins. I just can’t fathom to myself what 100 really means. It would certainly be something to look back on when it’s all said and done and I’m in my rocking chair somewhere.”

Did Brexton (Busch, son) shower you with Rowdy or water?

“That was water. That stuck gets a little sticky in the heat. It’s very hydrating though. You should try it.”

Are you going to run the Xfinity Series anymore?
“I haven’t necessarily had those discussions with Joe (Gibbs, team owner) or Pern (Dave Alpern, President), but from my understanding, there may not be anything sold for next year, so this might be it. Two more.”

Are you good with that?

Which are the Xfinity wins that mean the most to you?

“I don’t even know. I’ve forgot more than I did. I would say win number one was cool. Anytime you win your first one, so that was good. That was 2004 Richmond. There was a few that I missed that would have been really cool. At Charlotte in my first one, I finished second, that would have been cool. Damn, (Matt) Kenseth. Those Cup guys, they shouldn’t run Xfinity. I don’t know why they do. The 49th one, passing Mark (Martin). Mark was there, that was cool. Loudon, I believe that was my 100th NASCAR win, so that was cool. Some of the dominating ones we had. I believe we led all of the laps at IRP (Indianapolis Raceway Park). Just stuff like that and being able to have some really dominating days and the 13-wins season in ’10. I think that was ’10, that was really, really cool. Hard to pin-point more than that. The ones that were part of the Bristol sweep were really cool, getting the triple twice.”

What made you want to do the bow?

Why do you do it?

“I grew up in Las Vegas. Vegas is known for its shows and anytime a show was over, all of the performers would come out and do a bow to the crowd, so that was kind of my thing to the crowd after the show and putting on a big performance.”

Have you maintained the relationships with previous partners, and have they said anything to you about this milestone you have now achieved?

“A couple of them I have. Jim Sexton from Z-Line. He texted me and emailed me a few years ago. I hadn’t heard from him in a little bit, but Rick Dreiling from Dollar General. Him and I have remained really good friends. He’s been a huge supporter of mine over the years. I talk to him every now and then. Robert Nimlok from Lowes. He was the CEO of Lowes when I was driving the Lowes car. Him and I have remained in touch. There is definitely a few of them that I wouldn’t say I remain close to, but at least acquaintances.”